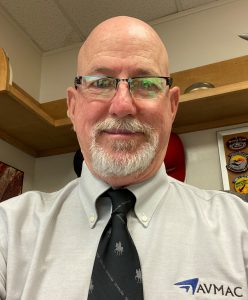 Cameron Anderson joined the AVMAC Team as the VMAQT-1 Site Supervisor in 2014 and became the MCAS Cherry Point/MCAS Beaufort Regional Manager in 2019. Cameron is a 30 year Marine Corps Veteran, retiring as a Master Gunnery Sargent (MgySgt).  Cameron brings extensive Aviation Maintenance experience on multiple aircraft platforms. He started his aviation career with various versions of the F-4 Phantom. His progression continued as he then transferred over to the F/A-18 Hornet.  He has deployed on numerous Naval Aircraft Carriers in his career from the USS Midway (CV-41) to some of the latest aircraft carriers including the USS Harry S. Truman (CVN-75) and USS Theodore Roosevelt (CVN-71) then finishing with his last deployment on the USS Enterprise (CVN-65).  Cameron finished his military career at the Center for Naval Aviation Technical Training (CNATT) schoolhouse aboard MCAS Cherry Point as their Maintenance Chief.